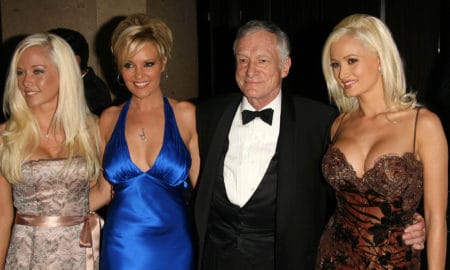 To Understand Hef, You Must Understand His History
Torrey DeVitto: On ‘Chicago Med’, Philanthropy, Her Love of Vegan Fashion
Prev2 of 4Next

You have won a Tony for your work. Which award is your most treasured and why?

Only one Tony won, as of yet, for “Clybourne Park”, a wonderful play and Pulitzer Prize and Olivier winner.
That is my most treasured, and I do treasure it because it deals so beautifully with racism — a subject that I feel can never be dealt with enough. This country and the world need to deal with unconscious and conscious hatred and prejudice if we are ever going to move forward as an enlightened, caring, peaceful society.

I am so proud of all five shows for which I’ve been Tony-nominated. “Peter and the Starcatcher” is fabulous, and the most Tony-Award winning of any new American play. “Fiddler on the Roof” was such a gorgeous, heartfelt revival. I loved “Next Fall” because I don’t believe any show has dealt with homosexuality better and it changed lives. The author and director received so many letters about how the show enabled them to come out to family members and be accepted. But “The Scottsboro Boys” remains my most treasured. It has changed lives. I doubt there will ever be anything to top “The Scottsboro Boys” for me. I was given that script again when I was searching for producers for “Desperate Writers”. I read the script on a Friday and then, the following Wednesday, flew to see it in Minneapolis. I brought my daughter’s college roommate to see it. She said I had to do it, because after experiencing the powerful emotional “The Scottsboro Boys”, she understood how important theatre was and how it could move people.

“The Scottsboro Boys” is Kander & Ebb’s magnificent musical directed by Susan Stroman, about the Scottsboro boys, nine teenage black youth who were wrongly accused of rape in 1931 racist Alabama. Their trials led to two pivotal Supreme Court rulings that everyone deserves proper representation and that blacks could not be prevented from serving on a jury. It actually sparked the Civil Rights movement in the United States.

When I was a co-producer on the Broadway show, I got involved with the Scottsboro Boys Museum, which was started by Shelia Washington, to keep the story of the Scottsboro Boys alive. I felt their history was so important that I became a founder of the museum and was so honored when I received the key to the city of Scottsboro, Alabama for my work. In 2013, I was honored again when I delivered the keynote speech at the signing of “The Scottsboro Boys Act” to exonerate the boys. Governor Bentley said I had helped change history.

After “The Scottsboro Boys” closed on Broadway, I was heartbroken. I wanted the show to continue and be seen by more people. It needed a life beyond Broadway. Because of my passion for the show, I was thrilled to get the rights to take it to London. First I took it to the multi-award-winning theatre, The Young Vic, where we were nominated for seven Olivier awards and won the Critics’ Circle Award for “Best New Musical”. Then we moved the show to the West End (comparable to our Broadway) where the show won the Evening Standard Award for “Best New Musical”.

How do you pick what projects you want to be involved? What is your formula?

I look for shows that affect me emotionally. I look for shows that are important. I look for shows that make a difference and that I can be passionate about. That doesn’t mean they all need be heavy dramas. I’m a lead (producer) right now on a new show on Broadway, “The Play That Goes Wrong”. This show is just incredibly laugh-out-loud, stomach-hurting funny. It is joyful. It makes me happy and it has that same effect on everyone I know who has seen it. It is a mega hit in London. It won the Olivier for “Best New Comedy”, has been running over three years, and is a major financial success. I saw it in London and fell in love. I was so honored by the opportunity to be part of the producing team in New York along with the fabulous Kevin McCollum, J.J. Abrams, and the original London producers Kenny Wax and Mark Bentley.
I recommend this show to anyone who likes to laugh. And it is an understatement to say we all need to laugh right now, because we are living in very scary, infuriating, depressing time.