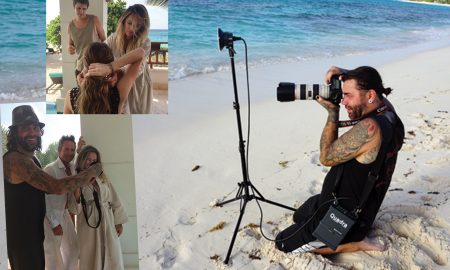 Over the last few years, NBC has focused its attention on Chicago-based shows: “Chicago Fire”, “Chicago P.D.”, and now “Chicago Med“. Both “Chicago Fire” and “Chicago P.D.” were instant favorites making it no surprise that “Chicago Med” garnered the same popularity. In under one year, the show already ranked #2 in its hour! With its stellar diverse cast and clever story lines, we can see why.

You may recognize the actress who plays Dr. Natalie Manning, the stunning and talented Torrey DeVitto of “Vampire Diaries”, “Army Wives”, “Pretty Little Liars”, and mostly as Carrie on “One Tree Hill”. But outside of her career, she is also very passionate about her philanthropic work as a Hospice Ambassador and supporter of PETA and The Humane Society.

While we have to wait until the mid-season premiere to watch the third season of “Chicago Med”, we took the opportunity to talk to Torrey DeVitto now about her incredible work on and off the camera and why you should be following this inspiring actor.

Growing up, you traveled a lot with your family, as your dad was the drummer for Billy Joel. With so much music around, how did you find your passion for acting?

There is such a connection through all the arts. When you’re playing music, you are also tapping into a character — whether it is through the expression of what the song means or just the persona you are putting on for the sake of a good show. I always loved performing. Seeing “Les Miserables” was really the moment that planted the seed for that passion.

You have played memorable roles on many popular shows over the last decade, from “One Tree Hill” to “Chicago Med”. Which role was the most difficult to embody? Which one was the easiest to embody?

They all have been equally difficult in there own ways. If I had to pick one that was the most challenging, I think I would have to say Melissa from “Pretty Little Liars.” Because unlike Nanny Carrie or Dr. Manning, Melissa — and the way the writers would write her each episode — would change so much. Every time I thought I had a grasp on who she was and what her intentions were, it would all change. It was hard to keep up with and to keep her consistent.

When you are recognized on the street, which role do people mention first?

Nanny Carrie, most of the time.

Which show would you say has the most opinionated/most passionate fan base?

What do you love about your role of Dr. Natalie Manning on “Chicago Med”?

I love the character the writers gave me and allowed me to expound upon. I love that she is a doctor and a single mom. I love that she is integral, yet has so much still to figure out. She represents such a wonderful type of woman that I am proud to play.

What can we expect from your character on season three?

You can expect more Manstead.. that I know for sure.