Rebecca and Fiona: “Every Female Can Be Independent In Their Own Way”

A little under a year ago, I met Rebecca and Fiona the evening of their show at Ruby Skye on June 20, 2013. This time around, on April 12, 2014, a few weeks before their sophomore album release, they played the same venue again so it was time for a Rebecca and Fiona update. They sat down with Viva Glam and talked to us about their amazing fans, their new album, and why women should take control of their own lives. (All photos by Brianne Nemiroff) 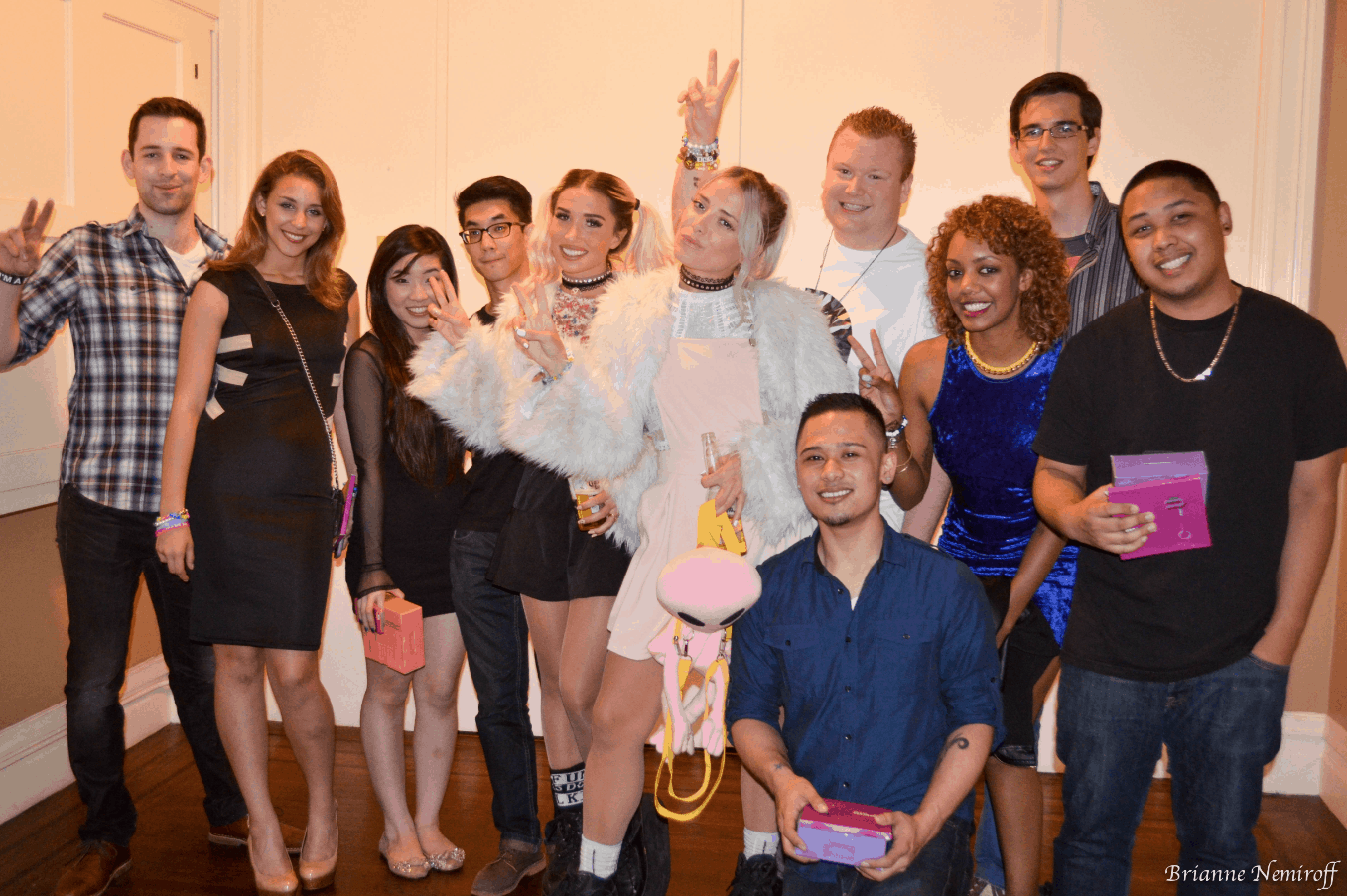 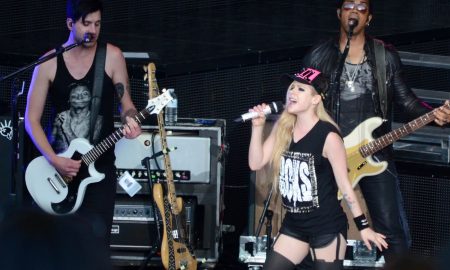 Backstreet Boys and Avril Lavigne: They’ve Got It Goin’ On
Jason Dohring: On Playing Logan Echolls Again and the Veronica Mars Kickstarter Journey 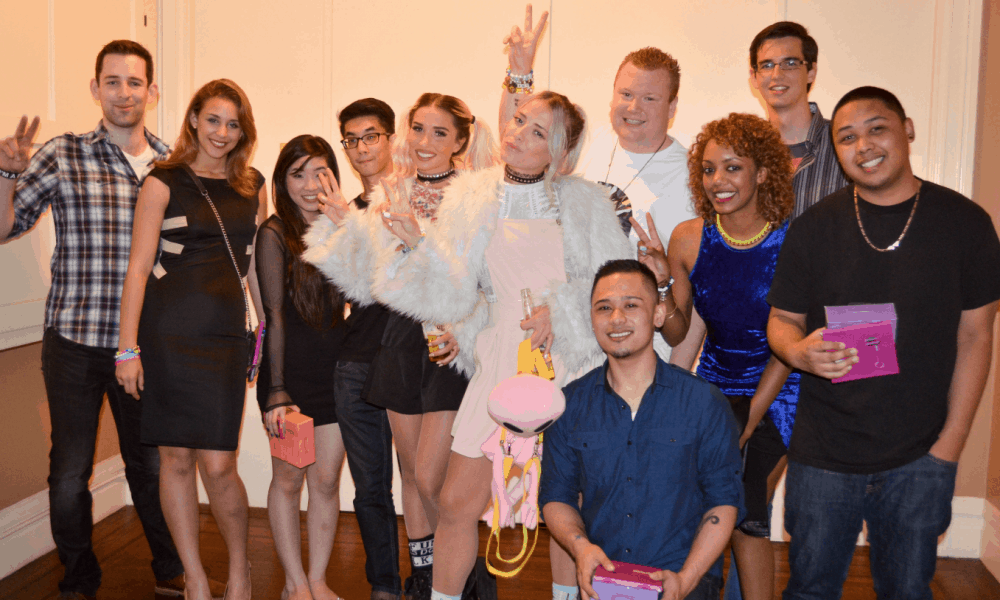 Q&A WITH REBECCA AND FIONA

How has life been on the road and have you traveled to places that you didn’t expect to play in the last year?

Rebecca Scheja-We’ve been touring a lot, but we’ve been going back to the places we like [as well]. We tell our agent to [book us again] in the cities we like.
Even if there’s a small but really intense crowd that loves your music and you get a lot of good feedback, you want to go back a half-year later .≤cause then you have new music, new energy, and a new set.

There were some cities we [hadn’t played before]. We’d never been to Seattle or Houston but some cities we went back to. In Portland, at a place called The Whiskey Bar, we had a really good show a half-year ago, and we went back and they were like “Ah, it’s a Wednesday. It’s not going to be that [great of a show].” They didn’t have high expectations, but it was the best show ever! It was an amazing crowd. It was a squeeze show and they felt bad .≤cause they wanted to have us on a weekend. But it turned out really great! We’re happy to see that when we come back, people have talked to their friends and they had brought more people. They ordered our shirts with our logo. They’re super cool fans!

Where do you think you’re most popular right now in America?

Fiona Fitzpatrick-[As an] overall experience, we had two amazing shows in L.A., the last two shows.

RS-You can tell the crowd changes [each time]. There are [always] different kinds of people. It’s weird if you are only playing for the same people! They all like different parts of the set as well. Some of them like us, the clothes, the way of acting, and some of them are there to listen to the actual music. 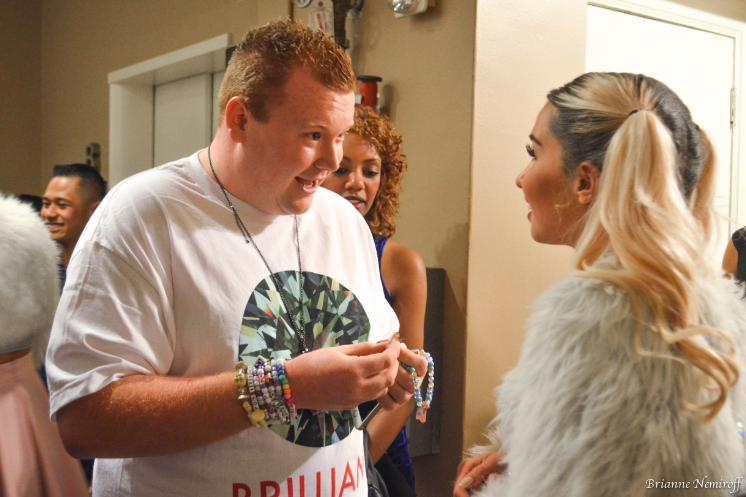 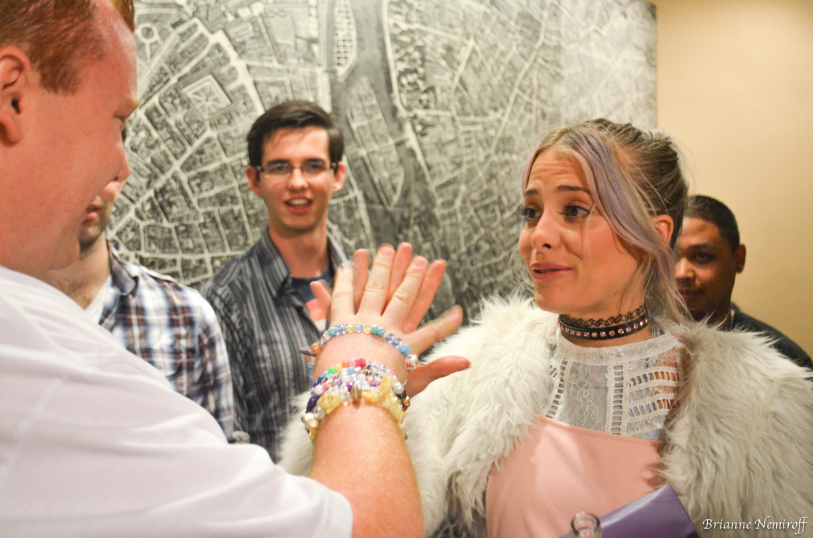 Your second album, Beauty is Pain, came out April 29th. What makes this album different than your first album, I Love You, Man?

FF-It’s the same. (Laughing) It’s us making music so in that way it’s the same, but we’ve developed a lot as musicians, artists, and producers.

RS-Our first album was our…first album. We didn’t know how to make an album. There wasn’t a decision to make an album, it was more like let’s make some tracks and we figured we should just put them together [in the end]. But for this album, we created tons of tracks and then we chose 14 songs to create a [cohesive] album. We love the first album. It’s great. We’re super happy with it and what we could accomplish [at that time], but [the second time around] we knew what we liked and what sound we wanted to make compared to the first album.

As you chose the tracks, was there a theme you were gravitating towards?

FF-The title, Beauty is Pain, comes from a track that’s not on the album, that kinda tells the story of the album. If you gather together, throughout all the cities, all of the stories about female destinies…

RS-Falling stars, people being torn apart, women being abused by society, society telling them how to dress, how to act, how to live, how it’s affecting a young girl or guy.

Is this for your fans in particular?

RS-Yeah, but it could be anyone.

FF-We were so inspired by Britney Spears, Anna Nicole Smith, [the idea of] not being able to handle the pressure of being the “perfect” girl. [It’s] the story of what happens when people get exploited in that way, how media sucks into that.
They’re just so interested in seeing a girl get destroyed that way as well.

FF-It’s like the story of Britney shaving her head and how we loved to dig into her misery. It says a lot about our society as well and that really inspired our album. 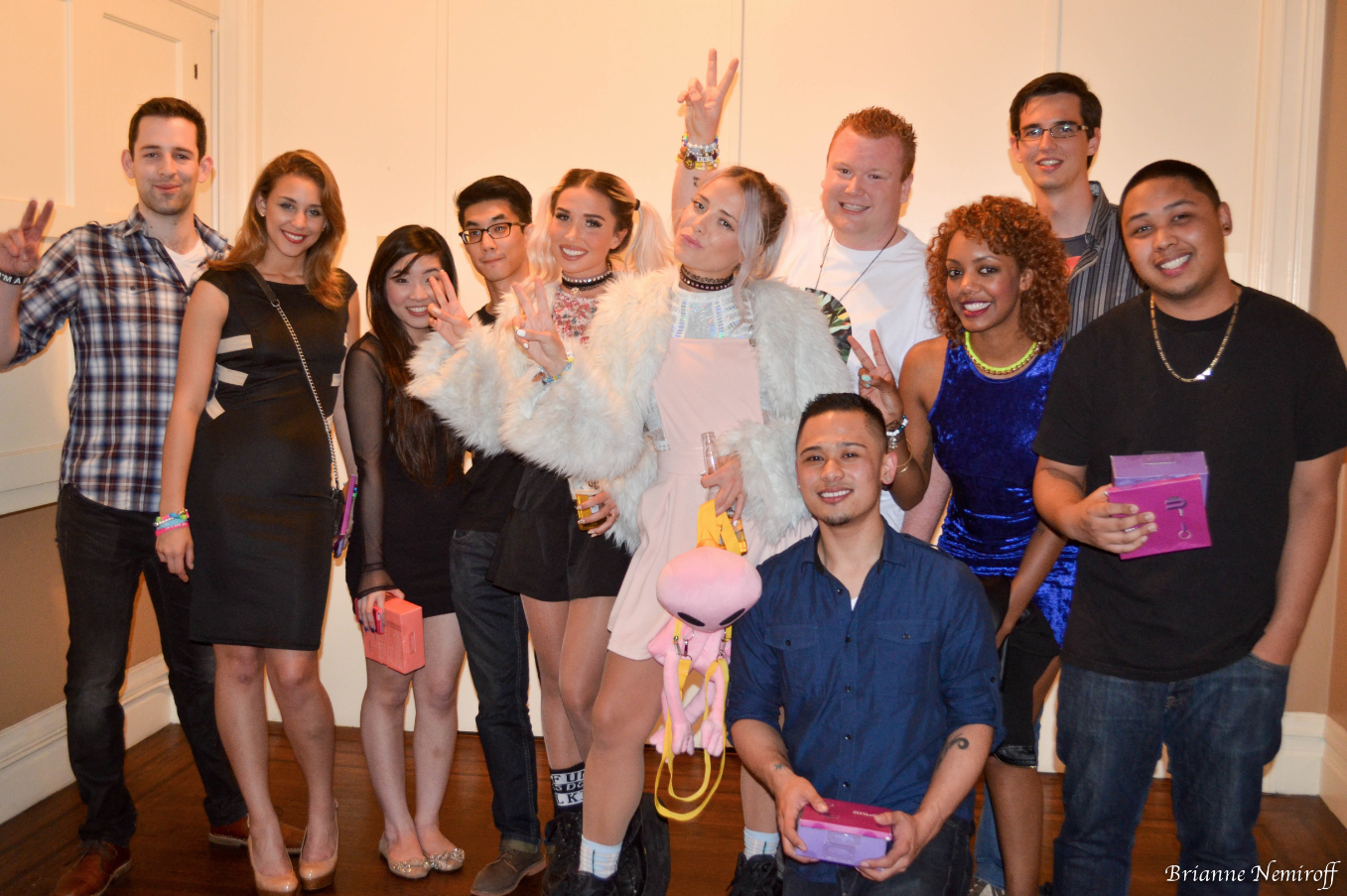 Do you find that the media is trying to exploit you guys as well?

FF-We have so much integrity…

RS-And we don’t f**king care. (Laughing) People can try to make us look however. We know what we believe in. We’re very different from all of the American artists and singers…

RS-But if you’re comfortable and you’re choosing your path and you’re making all of the decisions, then it can’t backfire on you. If I show my t*ts in a video, it’s my decision. If somebody asks me about it, I know the answer. I don’t have to be like why did I do that or for what reason?

FF-It’s your own sexuality, you own your own body.

RS-It shouldn’t be a question of gender or [anything else]. Everything should be equal. We’re doing exactly what men are doing. We’re taking control of our career and we’re making our own decisions.

You released two singles off of Beauty is Pain, “Candy Love” and “Holler”. Are you still moving ahead with the theme of different decades in your videos?

RS– “Candy Love” was 80s, “Holler” was 90s, and our next single is going to be our millenium video, TLC-style.

(They won’t reveal which song is their next single quite yet.)

Besides those two tracks, are you playing other new tracks on your tour?

RS– Actually, we’re playing almost all of the tracks!

FF– But we’re doing edits of them, so they are not in their original version.

What are your fans responding to the best right now?

RS– They really enjoy the “Holler” video. The response we got was overwhelming because we gave a lot of ourselves in the video. It’s very true to the stories we want to tell and it’s speaking to them. It’s about breaking through as a female. It’s feminism for us.

So with this album, are you trying to show the world that both of you as artists are in complete control and women should also take control of their own lives?

FF– Exactly that, but we didn’t want to show it by holding up a book, like a teacher, saying this is how you live your life. We want to show it by [showing] what we did. By our experience, this is very good and you can live your own way. You don’t have to do it the way we did it, but every female can break through and be independent in their own way. We can’t tell anyone to do it [a particular way] because that’s just morally wrong. 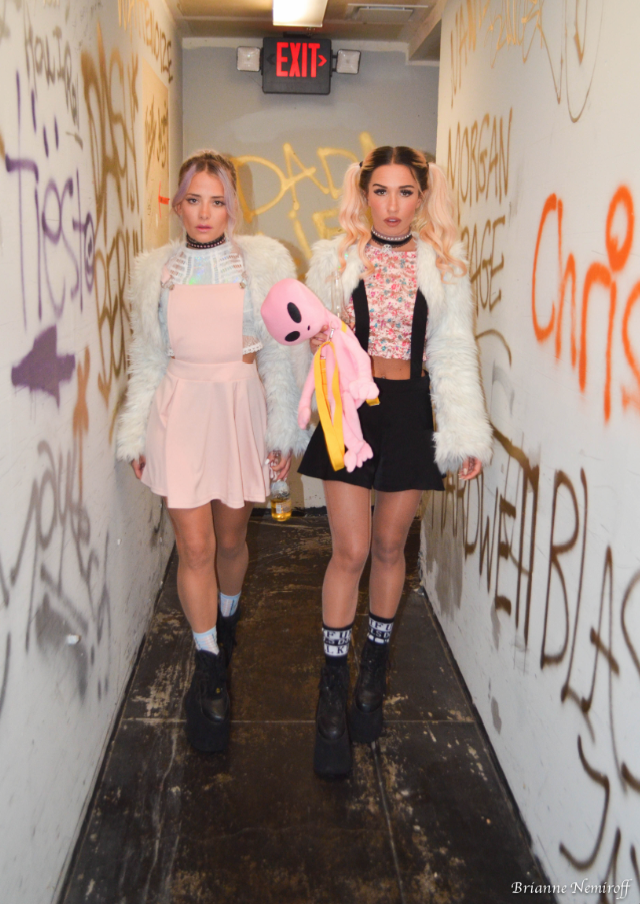 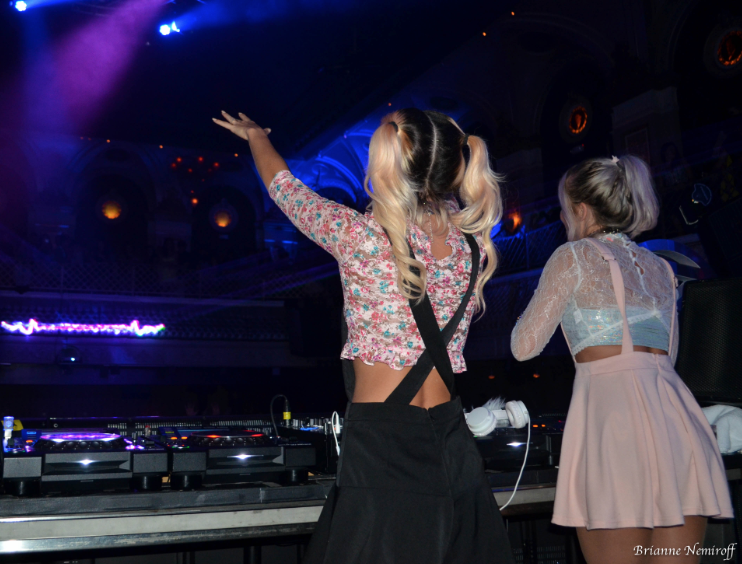 Rebecca and Fiona during their set at Ruby Skye