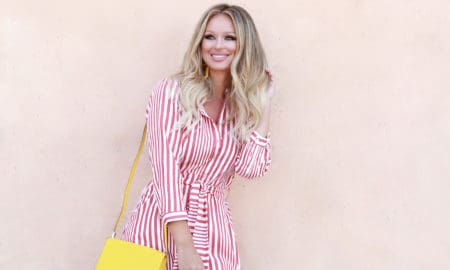 Back in 2011, the producers that brought you Nip/Tuck and Glee introduced
American Horror Story to FX. With over 130 award nominations and 39 wins, each season is shot to be self-contained miniseries, making it one of the most unpredictable series on television. But as the timeline for season 2
“Asylum” and season 4 “Freak Show” were only set 12 years apart, the creators brought back fan-favorite character, Pepper, for a second season, played by Naomi Grossman.

Before AHS, Grossman was a member of the Groundlings, an improvisation and sketch comedy theatre that produced megastars such as Kathy Griffin, Melissa McCarthy, Kristen Wiig, and Will Ferrell. She has also produced and starred in many solo theatre shows around the LA area.

Make sure to catch AHS on Wednesdays at 10 p.m. on FX.

As each season is its own miniseries, and you got to be part of two seasons as Pepper, which story arc did you enjoy the most?

I think the most recent, “Freak Show,” at least my character’s story arc, anyway.
It was such an epic story, spanning from 18-years-old in an orphanage, to 40-something at Briarcliff.
It came full-circle, which was satisfying to audiences, especially after having waited two years to see her story.
It provided me such a wide emotional range to play, which was an exciting challenge for me as an actress.
But mostly the story they bestowed upon Pepper was just so beautiful– infinitely more so than the one I’d written for her during my preparation for “Asylum.”
So yeah, speaking from my admittedly biased standpoint as Pepper, I’d say “Freak Show.”
But as an unbiased viewer of the show as a whole, maybe “Asylum?”
That was pretty hard to top.

As Pepper requires such a transformation, how do you get into character both physically and mentally?

I watched “Freaks,” of course.
I studied one of the stars of the film, Schlitzie’s posture and gestures and voice and expressions, and tried to channel him.
I’m decent at impressions from having done comedy, so having someone to model Pepper after made portraying her sensitively infinitely easier.
So that was my initial preparation.
Then, once on set, I’d just sit back and let the makeup artists work. Three hours later, I was Pepper!
In general, I found the effect of the prosthetics is a lot like when you put on a wig and play dress up.
Certain hair and wardrobe makes you carry yourself and move and speak in a whole different way.
I have this one long, dark wig that just makes me want to speak with a Spanish lisp.
Similarly, when I’d look in the mirror and see Pepper, I’d think Schlitzie, and so I’d naturally start walking and talking like him.
My initial preparation was solid enough that Pepper came quite effortlessly.