Acting legend, Meryl Streep, has responded after Rose McGowan criticized her over the planned silent protest about Harvey Weinstein’s behavior.

“It hurt to be attacked by Rose McGowan in banner headlines this weekend, but I want to let her know I did not know about Weinstein’s crimes, not in the 90s when he attacked her, or through subsequent decades when he proceeded to attack others,” Streep said in a statement released on Monday, December 18. “I wasn’t deliberately silent. I didn’t know. I don’t tacitly approve of rape. I didn’t know. I don’t like young women being assaulted. I didn’t know this was happening.”

On Dec. 16, McGowan took to Twitter to respond to the news that actresses are planning on wearing all black to the 2018 Golden Globes to protest sexual harassment: “Actresses, like Meryl Streep, who happily worked for The Pig Monster, are wearing black @goldenglobes in a silent protest. YOUR SILENCE is THE problem. You’ll accept a fake award breathlessly & affect no real chance. I despise your hypocrisy. Maybe you should all wear Marchesa.” The tweet has since been deleted.

Streep specified the extent of her business relationship with the infamous producer, “I don’t know where Harvey lives, nor has he ever been to my home. I have never in my life been invited to his hotel room. I have been to his office once, for a meeting with Wes Craven for Music of the Heart in 1998. HW distributed movies I made with other people. HW was not a filmmaker; he was often a producer, primarily a marketer of films made by other people.Æsome of them great, some not great. But not every actor, actress, and director who made films that HW distributed knew he abused women, or that he raped Rose in the 90s, other women before and others after, until they told us. We did not know that women’s silence was purchased by him and his enablers.”

The Oscar winner detailed how the disgraced movie producer “needed me much more than I needed him and he made sure I didn’t know.”

“Apparently he hired ex Mossad operators to protect this information from becoming public,” Streep wrote in her statement. “Rose and the scores of other victims of these powerful, moneyed, ruthless men face an adversary for whom Winning, at any and all costs, is the only acceptable outcome. That’s why a legal defense fund for victims is currently being assembled to which hundreds of good hearted people in our business will contribute, to bring down the bastards, and help victims fight this scourge within.”

McGowan responded Monday evening on twitter, “The Marchesa line was beneath me and I’m sorry for that. Seeing that picture of Alyssa Milano with GC has ignited something in me that I can’t quite articu late. There is no map for this road I’m on, I will f–k up. Peace be with you, go with Goddess.”

The Marchesa line was beneath me and I’m sorry for that. Seeing that picture of Alyssa Milano with GC has ignited something in me that I can’t quite articulate. There is no map for this road I’m on, I will fuck up. Peace be with you, go with Goddess. 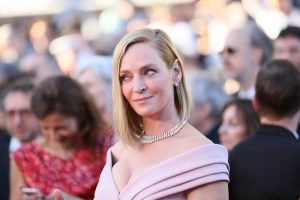