A few months ago, Kendall Schmidt and Dustin Belt of Heffron Drive finally embarked on their first U.S. tour. With their new single about to be released, it was time for an update from one of our regular artists.

Q&A WITH KENDALL SCHMIDT OF HEFFRON DRIVE Tell us about your new music. During the tour, we did three new songs. We have ten songs in total. I figured it was enough to get the idea across. Ironically enough, the three songs are totally different. It’s a good barometer of what people like.
What are the new songs about? And since you said they are totally different, what are the styles of the songs? One song is called “One Track Mind”. It’s a dubstep reference kind-of song. I really love electronic music. Another one is called “Feel So Good” and that’s a classic Heffron Drive song, written by Dustin and I on the fly, like most of the older ones were. The third song is “Art of Moving On”, a song I did with a guy named Steven Miller.
He’s a great songwriter. It [has the feel of a] singer-songwriter vibe even though it has a full band and is more on the [subject] of relationship stuff.
How did the fans respond to them? They liked them all! Depending on the night, cheers varied between the songs. But “One Track Mind” has pushed itself out [as the favorite].
Is that because the fans prefer the songs that are of the dance/electronic genre over the pop genre? I wouldn’t say they prefer it but also it’s a high-energy song. By the time it’s over, they are pumped.
How was the tour? It was great, over in a flash but [at the same time] it took forever.
Was spending more time together fun or was it a pain in the butt, too close quarters? Total pain in the butt (He says laughing). We’re the same friends as we’ve always been. We also have a lot of experience on the road together.
Do you find the fans are treating you differently on your own with Dustin versus when you are touring with Big Time Rush? I feel like maybe [during] the first few shows, people were apprehensive of what it was even going to be like, including me. Before we performed the first show, I didn’t know how the music was going to sound all together, how people were going to receive it, all that stuff. It was definitely something I was nervous about. But [the night of the last show], I had tons of friends in the audience. It seems a little more nerve wracking when people you know are there, but, more importantly, it’s for the people who I don’t know or the fans I’ve met tons of times.
You like to write about love. Is there anyone in particular you are writing about or is it just about general experiences? Some songs are about a person and some songs are about the general idea of love and different aspects of it, meanings behind it.
Do you feel like being a part of BTR has helped you develop your sound with Heffron Drive? Yeah, and also how to distinguish the two. I was listening to 24/7 today and I was like, “Yeah, it’s different. It’s [definitely] not the same.”
I feel like Heffron Drive’s style has elements of singer-songwriter and dance whereas BTR is more mainstream pop. Was that a conscious decision? It’s pop mainstream but also the lyrics had to be appropriate for the TV show. There are so many factors. There are tons of cooks in the kitchen, about creative and the way the song sounds, the mixing. No one can really argue with me about these songs and if I want it to sound a certain way in the mix, then I have control of that now. I’m more satisfied in my decision-making.
The night of your final show of the tour at The Roxy in Los Angeles you had hundreds of girls waiting for a meet and greet. There were a lot of girls downstairs. When I saw them all out there for the meet and greet, I was like, Oh my G-d, there’s a lot [of people] and it’s all girls, which is great because that’s what any guy would want. So, what do you look for in a girl? Do you have a type? I wouldn’t say I have a type. Girls I’ve dated or liked or talked to have been different shapes and sizes.
I think it’s something in the eyes or smile or the way that I feel, that I can just be myself. I’m myself all the time but I do also have quirks that people don’t see when I walk around in public. When I’m at home and I’m just doing my own stuff, I’m sure we all have our things that are different about each other. Very true. I know I’m a huge dork. Exactly, And me too. I’m very picky and opinionated so someone would have to be OK with that.
Do you have specific turn-ons and turn-offs? Turn-off…I guess maybe over-use of their cell phone. Turn-on…being calm and yourself and when a girl has their own style.
It doesn’t matter what it is as long as they commit to the way they want to look. 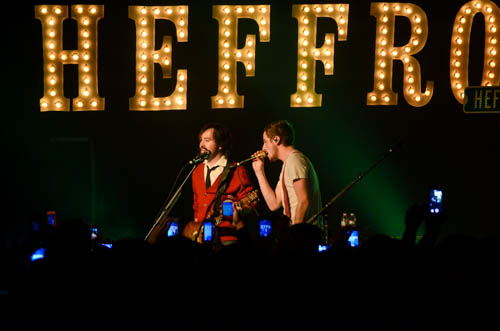 All photos by Brianne Nemiroff