There’s going to be a new branch in the Longoria Family Tree! Actress Eva Longoria announced that she’s four months pregnant with a baby boy. This will be the first child for Longoria and the fourth for her husband, José “Pepe” Bastón.

Longoria has been open about her desire to have kids of her own, while also praising the opportunity of being a stepmother to her husband’s three children from a previous marriage.

“If it happens, it happens, if it’s meant to be it would be a blessing,” she said to Ocean Drive magazine in 2016.

The actress also said that neither she nor her husband felt as they’d been missing out on the parenthood train simply because they hadn’t had a baby of their own.

“[My stepchildren] have been such a gift in my life,” she said. “I don’t feel like we’re lacking because we don’t have a baby.”

The former Desperate Housewives star fueled pregnancy rumors while vacationing in Athens, Greece, with her family in September. The actress was photographed in a loose-fitting floral dress, and some social media fans asked whether she was trying to hide a growing baby bump.

Longoria also shot down some pregnancy rumors herself from April, 2017. “I saw some pictures of myself [looking] really fat on a boat,” she said in a Snapchat video. “I have to tell you, all I did was eat cheese. So that’s the news of the day. I’m not pregnant, just eating a lot of cheese, a lot of wine, a lot of pancakes.”

“Everybody is saying I’m pregnant and I’m not. I was just lactose intolerant apparently. I just had to share because my whole family is calling me asking if I’m pregnant. Yes, I look pregnant, but it was just a ball of cheese, a ball of cheese in my stomach,” she added. “But seriously, I looked so fat, but you know what? That happens to people. Everybody gets bloated. I’m not bloated today, but this is pre-pancake. I’m about to go eat a pancake.”

Longoria and Bastón got married in Acapulco, Mexico, in May 2016. “[Our wedding] was so magical. We had so much fun as you can see from all the posts from everybody,” she said at the time. “It was the funnest wedding I had ever been to. I’m glad it was mine.”

Congrats to the happy family on their new bundle of joy!

Can Some Women Look Not Pregnant AT ALL in Their THIRD Trimester? Ask Sarah Stage! 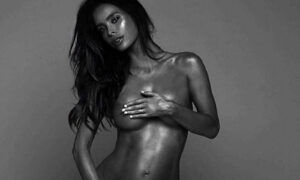