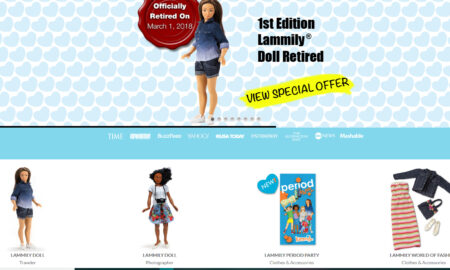 Forget the Barbie Dreamhouse! The Lammily Doll’s Newest Accessory is the Menstrual Pad!

Do you remember what you were doing on March 11th of this year? Unless it was your birthday, that date probably holds no significance to you. But for 13-year-old actress Jenna Ortega, that was the day that changed it all: her show Stuck in the Middle officially aired on the Disney Channel and she was the star.

Now two months later, Stuck in the Middle has become a fan favorite show on the network and she’s already gained almost 200 thousand followers on Instagram alone. Besides Stuck in the Middle, she is also going to be the voice of Disney’s first Latina princess, Elena, in the new series Elena of Avalor, coming soon, and she plays the role of Young Jane on Jane the Virgin.

Ortega plays one of seven siblings on Stuck in the Middle. In her real family, she is one of six! We had to ask about how her life has changed since the premiere of the show, how she’s handling her stardom, and if she’s starting to learn beauty tips on set!

STUCK IN THE MIDDLE

Stuck in the Middle premiered only two months ago. How has your life changed since the show premiered?

Well, I am no longer in public school, I have gotten busier, and I get recognized wherever I go. It is definitely different than anything I have ever experienced before, so it is going to take some time getting used to it.

My siblings are actually very similar to the Diaz children. Each and everyone of the Diaz kids reminds me of one of my own siblings. My oldest sister Mariah reminds me of Georgie because they are both clumsy. My older brother Issac reminds me of Rachel because sometimes as a joke he likes to make comments that he is super hot, even though I know he is kidding. My sister Mia reminds me of Daphne because she is very sneaky, bossy, and she is always watching! My younger brother Markus reminds me of Lewie and Beast combined because he is down to try any kind of stunt and is full of energy. Lastly, my little sister Aliyah reminds me of Ethan, because she is my BFTF (Best Friend in the Family).

You’ve built up a big following in a short amount of time on social media. How do you balance your personal persona and your social media/professional persona?

On social media I try to stay true to my real self. I want followers to get a feel for what it is like in my life and who I really am. Commenting back to people is something that I like to do also because I feel that I can connect with them. I feel like that is super important. I want people to know that I am just a normal person!

As someone in the public eye, your fans see you as a role model. What do you hope to do with your influence?

I want to spread positivity around the world. The world is filled with negativity and I do not want that to interfere with children following their dreams and loving themselves.

I would say my style is more skater-hip hop than anything else. I love wearing flannels around my waist, cool sneakers, and fun T-shirts. Sometimes I change my style up depending on my mood.

As all actresses do, you have to wear a lot of makeup when you’re on camera. Have you learned any beauty tips from being on set?
Harley does not really wear a lot of makeup because they want her character to look more natural. The only character that wears a lot of makeup is Rachel because she is the older sister that is really into herself. The makeup artists on Stuck in The Middle were trying to teach me how to make the perfect cat eye; I am still working on it, but I am getting better! Sometimes I can do pretty good ones, but it takes time.

Who are the women in your life that you find beautiful and why?

My mom is beautiful to me because she has let me follow my dreams and has supported me throughout my whole journey. She has sacrificed so much for me and our family and I cannot thank her enough. My mom is a straight shooter who does not sugarcoat anything, and I appreciate that. She is intelligent, kind, and always says the right things.

Stuck in the Middle airs Fridays at 8:30pm.