If you watched the series premiere of "The Face" early this month, you would already have a soft spot for our cover girl, Brittany Mason. In the final moments of the episode, she was fighting for a spot on the show. None of the judges had originally chosen to have her on their team. But, after Brittany shared her story and actually fought for her chance to be on the show, unlike some of the girls that simply accepted their “No”, Coco Rocha chose to be her coach.

If you watched the series premiere of The Face last Tuesday, you would already have a soft spot for our cover girl, Brittany Mason. In the final moments of the episode, she was fighting for a spot on the show. None of the judges had originally chosen to have her on their team. But, after Brittany shared her story and actually fought for her chance to be on the show, unlike some of the girls that simply accepted their “No”, Coco Rocha chose to be her coach.

Unlike a lot of the contestants on The Face, Mason has already done a lot in the public eye. She won Miss Teen Indiana at the age of 16 and went on to be 1st runner-up and Miss Photogenic at Miss Teen World that same year. In 2008, she won Miss Indiana and placed 7th in Miss USA. She has also created an anti-bullying campaign and has spoken to around 100,000 kids in Indiana, which earned her a Service to Mankind award from her hometown of Anderson, Indiana. If that wasn’t enough, she also has helped out with both Hilary Clinton and Barack Obama’s campaigns. So unlike other models that you may have seen over the years on ANTM or even the ones that got cut from the first episode of The Face, this girl is so much more than just a “face”.

Before you were a model, you were a pageant girl. What made you interested in pageants when you were younger?

I’m from a very small town and I always had big city dreams! I knew that pageants would give me the opportunity to grow as a person and also help pave the path towards a career in entertainment.

How was the experience of being Miss Indiana USA?

It was an amazing opportunity to be chosen to represent my home state at Miss USA. I dedicated my year towards implementing bullying
awareness programs in schools and was honored to work with children of all ages. My year as Miss Indiana USA was very special because I had the opportunity to work with Hillary Clinton and President Obama during the presidential campaign. It was an incredible experience to be able to say I played a small role in our country’s history.

Tell us about some of the people you’ve recently shot with on projects.

I’ve been very blessed in my career to work with so many talented and wonderful people in the industry. I’ve had the honor of shooting with Patrick Demarchelier, Fadil Berisha, Josh Ryan, and David Benoliel, just to name a few.

You are a contestant on The Face on Oxygen. How different was the environment of a reality show? Were there any challenges?

Being on a reality show is tough! Everyone seems to want to be on TV, but really consider your life being put under a microscope, in unrealistic situations, and then left in the hands of editors.

What were some of the things you learned on The Face? (In specific to modeling, about the industry, or life)

I’ve already had a great career (and I’m not done yet). But, for me, the show was something that I wanted to do to share my story and further my work in philanthropy. It was not easy for me to be so open, and I have never spoken so openly about my past. But, I knew in my heart, with what my plans are for the future, going on The Face would allow me to have a voice and it is a stepping stone towards the direction for which I want my career to be remembered. While some may misinterpret that as a “sob story”,
it is anything but. I do not need nor want anyone’s pity because my story is not a sad one. For me, I wanted to share some of the struggles I have overcome to reach others out there that may feel they have an impossible dream. I want to be and set that example that no matter who you are or where or what you’ve come from that you can make your dreams a reality. 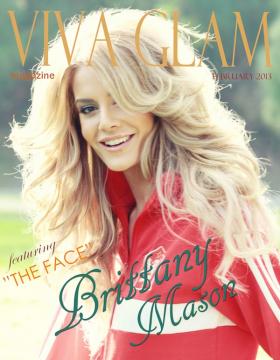 How is this show different from the other modeling shows such as ANTM or Make Me a Supermodel?

The show is entirely different from any other modeling show out there right now. It gives you a more intimate look at the life of a model. It’s set up with three legendary supermodel coaches, Naomi Campbell, Karolina Kurkova, and Coco Rocha. Each coach has their own team of models all competing against each other on different challenges and ultimately one model will be named the face of Ulta Beauty. Be sure to watch Tuesday’s at 9/est on  Oxygen. GO TEAM COCO!

How was it to channel Farrah Fawcett for the Viva Glam shoot?

I have always been a fan of Farrah Fawcett. She is a 70’s style icon! I have also been referred to as the “All-American girl,” so it was fun to be able to still show a little bit of my own personality while still embracing the essence of Farrah. I even attempted to learn how to skateboard like her to capture one of her iconic photos. It was a great day!