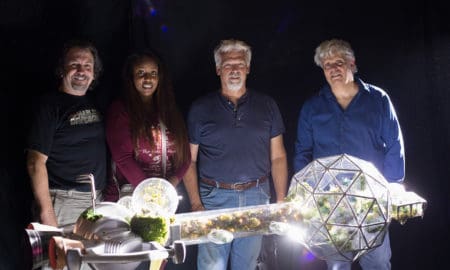 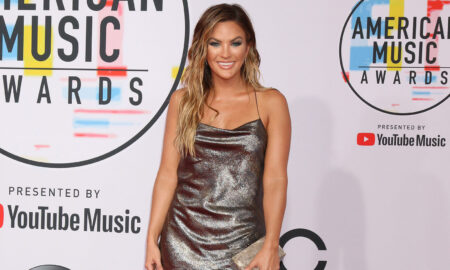 Few musicals are as magical as “Aladdin”. What’s not to love about this Disney classic? The original film’s brilliance is hard to match with its uplifting underdog storyline, unforgettable music, and laugh-out-loud performance by Robin Williams. When Disney started adapting their more recent classics to the Broadway stage, “Aladdin” was an obvious choice.
In March 2014, the magic of “Aladdin” was brought to Broadway and Disney fans flocked to the city to witness one of their favorite films brought to life.

Four years later, the audiences still watch in awe as this iconic love story develops in front of their eyes. It’s hard not to mesmerized by each and every prop and costume as every kick and twirl allows the fabrics to be caught by the light, projecting a kaleidoscope of color against the cascading dwellings of Agrabah. And who can forget the flying carpet scene of “A Whole New World”? You can’t…and no matter how old you are, you feel like a kid again.

We talked to Princess Jasmine herself, the dynamic and gracious Courtney Reed, who has played Jasmine since day one! Yes…she is the ONE AND ONLY! We talked to her about how she gets into character, what people can learn from Jasmine in 2018, and why she’ll never get sick of singing “A Whole New World.” After that, we talked to the Gregg Barnes, the head of costume design for the musical. From the silk to the sequins, we found out how everything was sourced, how it was made, and what influenced the spectacular costumes. 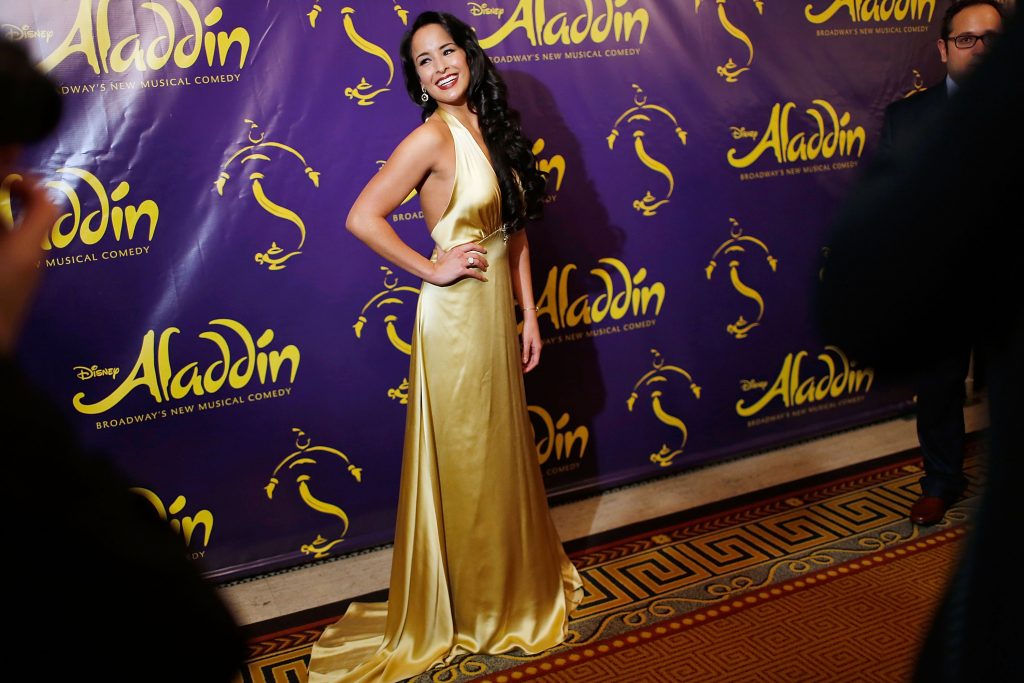 A Conversation with Courtney Reed

You play the role of Jasmine. She’s always been a favorite among girls for her independence and, of course, her wardrobe. Was Jasmine a favorite of yours growing up?

Definitely, my favorite, number one. She was the only one that I looked like! She had all of the traits that I wanted to have. She was stunning and gorgeous and had this long, dark hair. She was feisty, sassy, and strong-willed. She was pure of heart and I just loved everything about her.

What do you love about playing Jasmine? What keeps you happy in this job, besides a steady paycheck on Broadway?

There’s so many things. It’s hard to find roles that you feel like you can impact people’s lives, in a sense. I see it daily. I see it with feedback at the stage door and when people’s faces light up during certain numbers. You can hear the gasps during “A Whole New World”. It’s so hard to find roles like that. I feel so lucky that I get to portray such as strong female character and especially for the younger generation and the current generation. Even for people who have never seen the movie!

What do you think the audience can still learn from the character of Jasmine in 2018? What themes are relevant with today’s feminist culture?

I think two things – that it’s OK to actually want to find a true love and [still be independent]. She has both. She’s not going to say “I don’t need a man” even though she knows that she’s really independent. She’s saying that she wants to find someone that she truly loves, a genuine connection with somebody, instead of an arranged marriage. I think that that’s two-sided in a sense. It’s OK to be independent and a feminist but still desire to be in love. I think that’s what some people get upset about – that she finds somebody at the end anyway. She wins in the end! 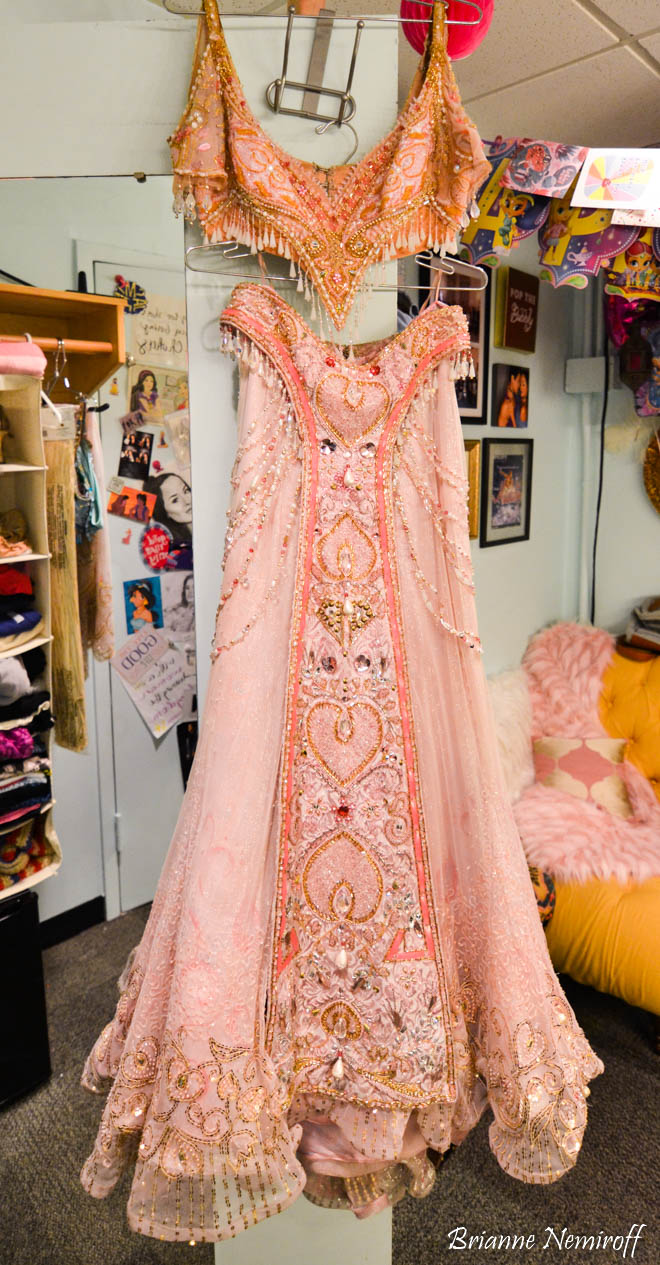 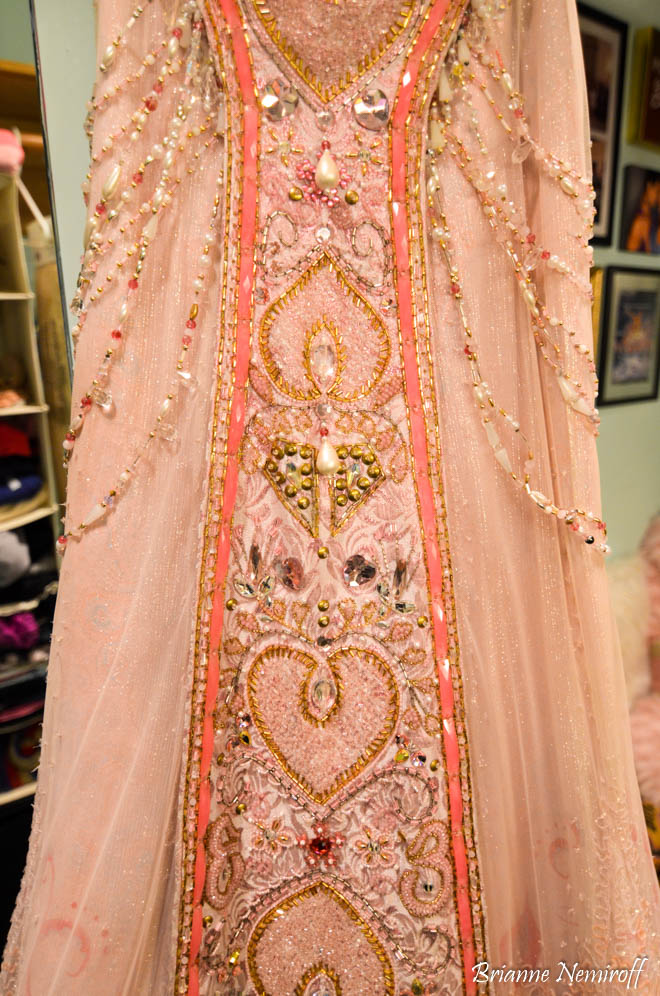 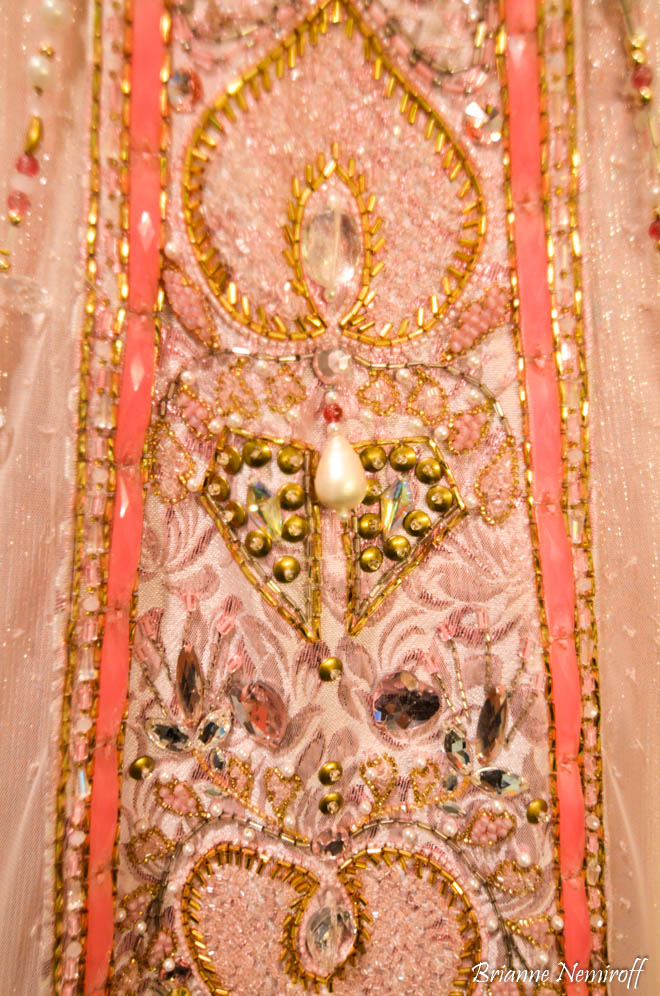 A closer look at the beading on Jasmine’s wedding gown

Has playing Jasmine helped you learn anything about yourself?

Definitely. She pauses. I’m really looking through myself with this Q&A! I think it’s to always be confident. That’s probably what I’ve learned the most from her. She’s confident in everything that she believes in, and stands up for it, and to other people about it. Even when you’re not feeling the most confident, you just believe in yourself and you can get there. 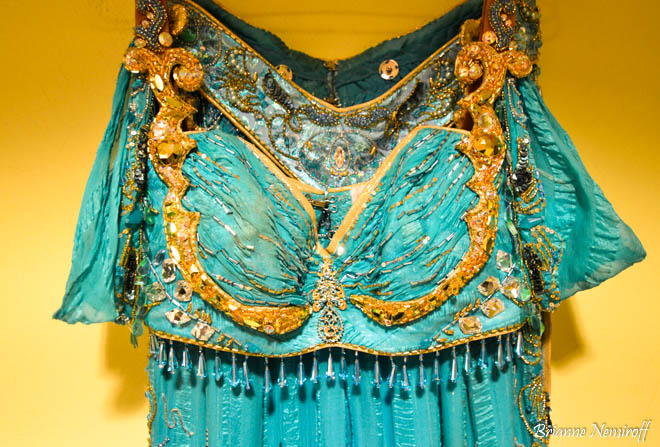 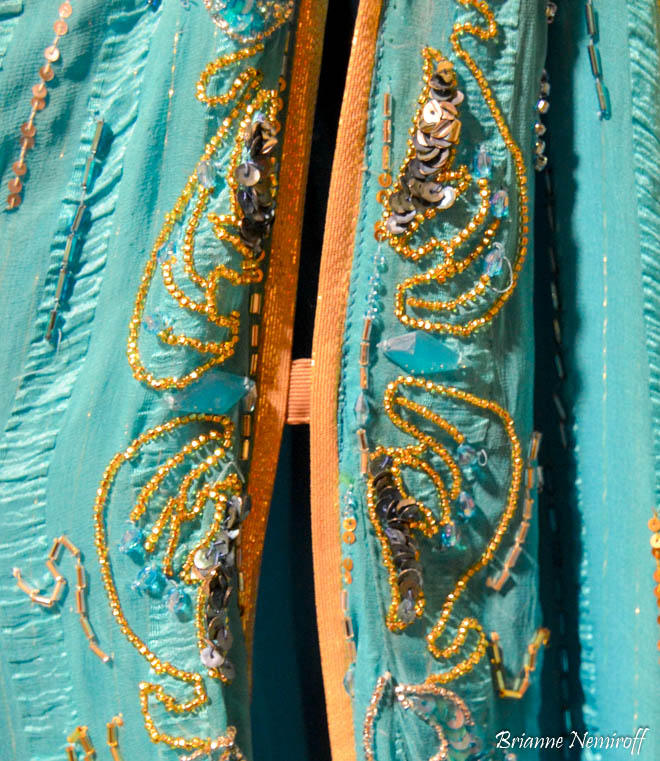 A closer look at the beading on the pants