Sandra Bullock, Cate Blanchett, Rihanna and More in the First Trailer for “OCEAN’S 8”

Anna Kournikova and Enrique Iglesias are officially parents! It was confirmed that the former tennis star, 36, gave birth to twins on Saturday, December 16, in Miami. The duo, who kept the pregnancy in full secrecy, had a boy and a girl named Nicholas and Lucy.

On that same day, Kournikova shared three photos on Instagram, including one of her riding on a boat and wearing an oversized windbreaker jacket from Iglesias’ tour. She captioned it “#miamiwinter #nofilterneeded. Enrique also posted a pic on that day from what appears to be the same boat.

The famously private couple had been dating for 16 years after meeting on set of Enrique’s “Escape” music video back in 2001. Anna, 36, and the Spanish pop star, 42, are clearly very good at maintaining their relationship very private. The usually low-key couple managed to keep the pregnancy private for the whole nine months.

“No, no, I’ve never met her before. But I’m a big fan,” Enrique said during the MTV’s Making the Video back in the day. “Ya, I’m sure a lot of guys want to meet her, you know. I’m one of them. She’s beautiful, talented, great tennis player. And I’m sure she’s going to be great in the video.”

After the shoot, the two began dating and stayed together over the years. There was some speculation that the couple tied the knot, but they’ve yet to ever confirm the marriage news.

In 2014, the “Bailamos” singer didn’t reveal anything when asked if he was thinking of walking down the aisle. “This is a new era! A paper doesn’t guarantee your happiness. Besides we are just fine with sex and love,” he said in an interview with Latina magazine.

Nonetheless, two years later, he gave a clue that it was possible the pair had already tied the knot. “I don’t believe you need a piece of paper to show you love someone,” he said when asked again in 2016 if he had any plans to get married. “Who knows what the future holds.or the past.haha.”

Back in June 2016, Kournikova published a rare photo with the singer and her little brother, Allan .Æ it’s one of the few photos the two have ever shared together. While they’ve never confirmed their relationship status, she does show a huge yellow diamond on her left hand’s ring finger.

Congrats to the lovely couple!

Chrissy Teigen Is Pregnant, Expecting Baby No. 2 With John Legend 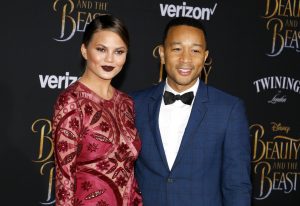